Venus is much like earth was many millions of years ago, acid rain toxic gas hurricanes in the sky, and volcanic rock, magma and lava on the surface.

I figured that the only place one could race on Venus would be in a surface fracture, a giant crack in the rock. this would shield you from the extreme winds, but you would be exposed to lava below.

I wanted a stage that was not a circuit, but a long journey from A to B. There would be only a start and finish checkpoint, and the player could navigate as they wished.

I modeled the walls for this stage by first taking a photo of a crack in a piece of concrete. Selecting the right crack was important. I then adjusted the levels of the photo, to turn it into a 2 colour image to produce something looking like this.

Next was to make it 3D. I ran a vector trace over the image using Inkscape to transform it into an SVG (scaleable vector graphic). Then I imported the SVG into Blender. From there I could extrude the SVG vertically and round the edges off using a bevel function, to get something like this. 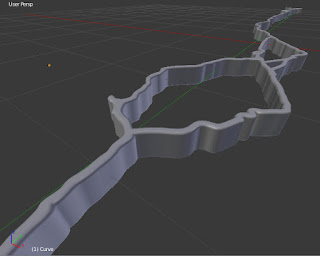 Next was to create a polygon mesh of this shape, so that I could recalculate the normals. A normal (in this context) is the direction that a polygon is facing. Polygons in blender and unity have one facing side. This means that they are only visible from that facing side within Unity and in the game. The initial shape I made had polygons facing outwards, recalculating the normals was a way to make all of them face inwards. Also, creating a polygon mesh from this shape meant that I could remove the top and bottom, leaving gaps for sky above and lava below. This is what the walls looked like after this process. 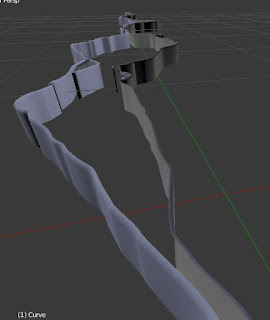 After adding some effects in unity to make the place appear hotter, here is what it looked like in the end. I also created some boosting rings for this stage.